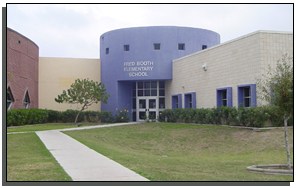 by Clara Zepeda and Sandra Tumberlinson

In 1909, the school board began looking for a suitable location for a school building. By July 24, 1909, 2 free public school brick buildings were planned. June 1910, Mr. Eudress of Austin had completed plans of both proposed school buildings and the school board accepted the plans. 1st Ward School, built in 1910, was renamed The Fred Booth Ward School on March 9, 1931, in honor of Fred Booth, a local business man, former school board member and owner of Mont Meta Memorial Park who had died the previous year. Teachers in those early days of 1909 earned $60/month and the principal was paid $80. The enrollment by 1925 was close to 700 students (500 more than the high school) with 14 teachers. A large addition was made in 1922, a four room addition was made in 1928, the auditorium was built in 1930, other additions were built in 1942 and 1945, all of which have since been razed. In January 1915, the outhouses were remodeled. In July of 1928, toilets were added with the completion of the new addition. On September 30, 1946, the auditorium roof collapsed, but no one was hurt.

Over the years, the Fred Booth building has served the community of San Benito in many ways-as a school, hospital, voting place, storm shelter and social gathering place. In the fall of 1918, Spanish influenza reached San Benito and the city council decided to take preventive action by ordering, “That all public places, and placed of public gathering of every nature and description be closed are hereby forbidden from opening after nine o-clock a.m. on the 13th day of October, 1918. Public places and places of public gathering for the purposes of this ordinance and order shall and do include all schools, churches, theaters, and places of public amusement and moving picture shows.”

The same night the local chapter of the Red Cross executive board met to make plans for handling possible outbreaks of the disease. Makeshift hospitals were set up. Dr. Morris and Dr. Cash were the doctors in attendance. Workers enclosed the new open railroad platform to use as a temporary hospital. The other hospital was at Fred Booth School.

Lupe Aguirre worked as a doctor’s aide in the emergency hospital in this school building. “People that died,” he said, “we’d just take them and put them in a wagon and take them out here to the old city cemetery and just dump them in there. We didn’t have time to build them a casket or nothing. We’d just wrap them in a blanket or a sheet and dumped them in there and bury them.” Hundreds died, and anyone with the slightest degree of medical knowledge pitched in Aguirre recalled a dentist named Dixon who proved to be a competent physician as well. “We saved a lot of people’s lives,” he said, “but some to them was so bad, we couldn’t do it. Something you regret in those days.”

On November 13, 1918, the quarantine was lifted and services of Thanksgiving were held at all the churches. Schools and other public buildings were reopened and life continued.

During the hurricanes, Fred Booth was used as a shelter and after the 1933 storm, women of the community gathered on weekends to make pillows and mattresses. During the depression, can and dry goods would be issued for the needs under the shade of the arcades.